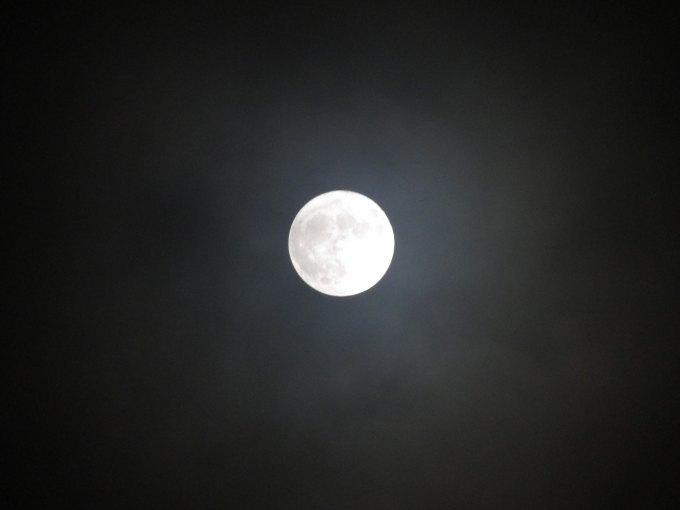 Ruebus sighed. The mountain air chilled him, and he pulled the thick blanket more tightly around him. He had already removed his clothing and placed them in a bag in the back of the pick up. He was miles out of town, and the scent of pine assured him of the closeness of wilderness. Night was falling and a few stars were already peeking out at the retreating day. His heartbeat had slowed and he was comforted by the methodical thud in his chest as he looked up to welcome the night.

He had found it amusing that the full moon had fallen on Halloween this year. Earlier in the day, he had even kidded himself that he would be able to stay in town, as everyone would think he was just wearing a costume. The smile had soon faded though. He could never completely remember the full effect of the transformation, but he was certain that it would be all too convincing. He could never even remember if he walked on two legs, or ran on four. In fact, all he ever remembered was what we saw and felt in his dreams. The chasing down of a deer or the bloodlust thundering through his veins just before terrible jaws snapped shut.

This was his fourth full moon. If he had known that the dog he’d hit that day was a wolf, he probably wouldn’t have even got out of the car. But that was old news now. One of the benefits of being a lycanthrope was a remarkable ability to heal and the scar had disappeared after his first full moon. He had been on the ranch, bringing in the horses when he had begun to change. The horses had been spooked all day. The next morning, he had found what was left of the two that hadn’t fled fast enough. Ever since then, he had made sure he was no-where near a human on the night of the full moon. He was never going to risk that.

The noise of the engine snapped him out of the trance he had slipped into. A car was coming up the road. It was still out of sight, far round the bend. But it was getting closer. His heightened senses took over, his ears, already slightly narrower and more tipped than a few minutes ago, seemed to prick up and follow the sound as it drew nearer. He was poised to run. But something held him there.

The car screamed round the bend, almost out of control. It was a black SUV, with tinted windows, and even his eyes couldn’t see the driver. The popping sound from the wheel arch came unexpectedly. The car was already sideways when the blowout shook the chassis, lifting it into the air as it spun wildly out of control. It crashed down onto its side and slid along the road in a shower of sparks and grinding metal, the sound so loud in his ears that he lifted up his hands to cover them. He could feel his hands and palms tingling as thick fur threatened to sprout from his pores, and his fingernails thickened and hardened as they rested against his skin.

The night descended still, and Ruebus knew that only a few seconds of his humanity remained. He didn’t look behind him as he heard the family scramble from the car. He ran in the opposite direction, driving himself further and further from the sounds and smells of the accident. He began to head for the tree line, hoping the wolf in him would carry on in the same direction. It was not to be.

The snapping sound in his knees drove him to the ground in a crumpled heap. As his leg bones broke, shattered and reformed into a new shape, he let out a blood-curdling scream of agony. It only ended when there was no air left in his chest. His eyes bulged in their sockets as they changed shape and colour, seeping blood as they did. The thick, dark brown fur erupted from every pore in his skin, as steel-like talons, as black as the oncoming night, curled from his fingers and toes. His spine cracked as it curved, sending him into a spasm of renewed agony. The changes hit him in waves, re-shaping his legs into powerful back limbs. His arms bent and buckled as they became heavy and hard. His skull flattened and fractured as long powerful jaws extended into place. As if in triumph of overcoming the frail human form it had been only moments ago, the wolf roared into the night air, and held its head high in a single, chilling howl.

The scents were what came to it first. The leaking oil from the upturned engine; the spilling gasoline, the wisp of perfume from the mother’s neck, the sweat and blood on the hands of the man. They all tempted it back towards the road. It slunk silently towards the brow of the hill where it already knew the car lay. At the ridge, it paused as it saw three people huddled against the underside of the upturned car. The wolf allowed them to see him as it took a few careless steps towards them, sending loose stones down the bank in their direction. It savoured the sounds of the screams and the smell of fear in the air as the two females stood up. It fixed its eyes on the man as it parted its lips and narrowed its eyes as it thought with evil pleasure of the nightmare its human-self would wake from the following night. And then it leapt.

If you like the short stories sometimes featured on this blog, you can find novels by the author here and here.