As the author of a book named Shadow Beast with a marauding big cat at its heart, I couldn’t really resist the ten day ‘Indie Roar’ challenge set by The Notebook Blogairy. Today’s challenge (Day 9) is to champion five favourite independently published books. Although I am still relatively new to both independent publishing and reading, I can already thoroughly recommend it. You will find stories you never knew were out there, and writing as good as anywhere. The true strength of the indie writer is being able to write what they want – so there are no limits. Whatever you are looking for, its almost certainly out there. And if it isn’t…maybe you should write it! These guys did! 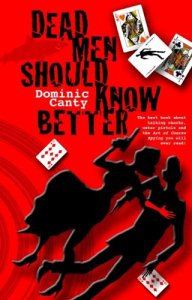 This is the debut novel of my friend Dominic Canty, and as a truly rip-roaring read, it thoroughly deserves its place on this list. The narrative follows Bristo Trabant, a geek from MI6’s IT department, as he is catapulted into the world of international espionage, armed only with the trusty ‘Beginner’s Guide to being a Secret Agent’ for comfort.

Along the way we meet talking sharks, life-saving water pistols and encounter funny takes on the cliched staples of deadly card games and car chases.

Although not widely available at the moment, it’s worth tracking down and waiting for. Book two is currently being researched and written as we speak! You can find out more about Dominic and the book here.

2. The Miryan Heir: Journey of the Marked by Rebecca P. McCray

This is my current read, but I am already hooked! This brilliant Young Adult fantasy boasts wonderfully colourful characters, all with their own intriguing back story and background. As they and the rest of the story comes together, you realise you are on a blade and ray-gun wielding thrill ride.

The visual depictions alone would make this a wonderful mini-series or movie. The vivid accounts of the different alien races, the blue, werewolf-like graelith henchmen and the even darker villains are all too easily etched into the imagination with each turn of the page.

Again, book two is on its way. You can find out more about Rebecca and the book here.

I discovered this book after watching the moving documentary Blackfish. Neal unashamedly put the positive campaigning of the Blackfish brigade to good use, and was clearly inspired by a love of the ocean and its creatures.

Invoking native American legends, up to date scientific research and delivering a real sense of just desserts on the corporate bad guys, it is the embodiment of wish fulfillment for many animal advocates.

As an author who also picked a fiery, green-eyed redhead for his heroine, I can say I genuinely enjoyed this ocean going, legend seeking adventure.

This book is vividly written, with gripping narratives and characters alike. It is well named too, as it explores the legend behind what is arguably the world’s most notorious cryptid, or as-yet-undiscovered creature. Penz has clearly done his research, and as somebody with a similarly themed story up his sleeve, I am glad to say the direction he takes the story is new and refreshing, and luckily different from what I have planned!

We find strong female characters, conspiracy and of course a cryptid in the new author’s edition of the book. Another great read!

Find out more about Eric and the book here

This tale again centres on cryptids, but this time they are even more fantastical than our legends. As we track down the terrifying creatures through the eyes of a tracker and hunter building the world’s strangest zoo, dealing with problem creatures all over the world, we also encounter activism and good intentions that spell disaster for a small town that really harbours monsters.

I really loved this book, my only gripe being that with the world of cryptozoology so rich in imaginative inspiration, I would have loved to read about some of the great monsters of myth rather than the fictional fantasies here. But at the end of the day, the monsters are no less real or scary!

And okay, last but not least, I have to mention my own book. I am really proud of Shadow Beast. It represents years of hard work, and good and bad times gotten through whilst I wrote it. I am humbled and chuffed by the lovely reviews it is getting and the success it is having. I have fabulous support from friends and family, who have been there from the beginning. But I have also had amazing support from a huge community of independent authors like those above who have helped promote and praise the book further. And this is what Indie Roar is all about, championing the amazing efforts of indie authors everywhere! So if you have a book in you, join us. If you want to read ‘off the reservation’ then find us. Either way, you won’t be disappointed!