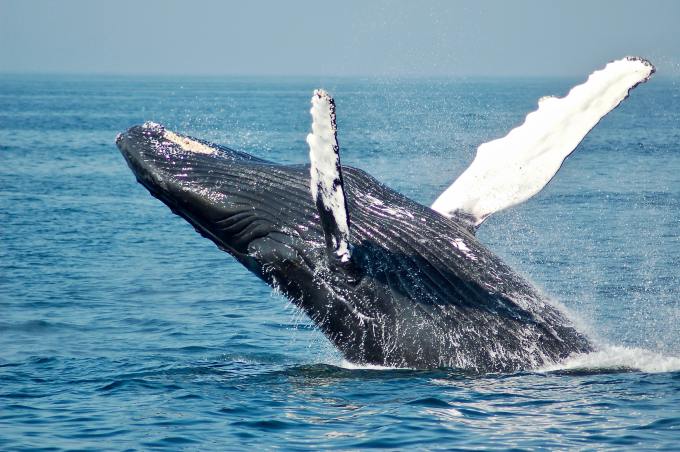 For this Work In Progress Wednesday, I’m introducing you to a science fiction story I’ve had on the back burner for some time. Set in the oceans, it explores the backlash of nature against humans, driven by an unseen, unknown force.

A shuddering, violent exhale of breath burst from the blow hole of the bull, as his great back breached the surface and rolled under again. Close to exhaustion, he drifted a few yards and stilled his tired body. The water around him was colder, darker, and much shallower than his usual paths and harbours. The pain in his head had driven him far beyond his familiar haunts, into dark lonely seas.

The sound of the small boats above and behind him stirred him into laboured movement again. He slowly arched his back and raised his tail into the air, smashing it down onto the water’s surface to vent his frustration at their presence and efforts. Although the pulse in his head was much more subdued in these colder, eastern waters, he still had to fight the aggressive urges that swept over him. In the sixty-five years he had lived, he had been lucky to have never been hunted, although he had witnessed the pursuit once as a calf. His memories of the water turning red, his father’s screams as his side had exploded, and the thrashing slaps of his flippers as he writhed in agony had long been buried. But recently, they had surfaced again, tearing through his consciousness with renewed intensity and purpose.

Since the death of his father, whenever he had heard the mournful, grieving song his mother and aunts had sung that day, he had known to turn away and seek new seas. His new memories of humans had been good ones. They were of small boats like the ones surrounding him now, filled with people that coaxed him closer with gentle sounds, or divers drifting with him in warm blue water. He bore them no grudge.

The bull rolled onto his side, letting his flipper tower out of the water. Residual streams ran down its surface before it splashed back down. He righted himself and moved off again with deliberate flicks of his flukes. He ignored the purr from the boat motors, his echolocation telling him he was unable to go much further now. Although invisible to him in the dark murky water, he could sense the banks of the river rising out of the bed of the estuary and closing in on him. He could taste the mixture of salt and fresh water, the salinity dwindling with every move forward. The physical toll of his journey, and the extra effort needed to keep his mass buoyant in the waters of the river was draining the last of his strength. He knew he wouldn’t live much longer. He hadn’t fed during his lonely swim to the east and south.

Sergeant John Mitchell of the Metropolitan River Policing Unit circled the immense whale again, frustrated by its stubborn passage along the Thames. The small boats he had commandeered to try and force the animal back were not having the desired effect, and as he looked up, he saw that several recognisable silhouettes of the London skyline were coming into view. Largest and closest was the London Eye, the giant Catherine-wheeled tourist attraction whose elevated pods gave views stretching across the capital. But today, all eyes were looking down.

The tide was at its highest right now, but in five hours’ time, the mighty Thames would be at its lowest point. The whale would be in serious danger of becoming stranded in the shallows or even on the banks.

He glanced at the helicopters beginning to gather in the sky. The stubborn cetacean was the only news story for Londoners today. Humpback whales followed strict migration routes between the polar seas and the Caribbean. Although they were known to spend several months off the coast of southern Ireland and even western Scotland, it was a very rare and strange occurrence to see them in the North Sea or English Channel. One had never been reported in the Thames before.

The whole spectacle sickened Mitchell. If the whale was to die, which he now suspected was its reason for wandering into the estuary in the first place, the city would be able to watch it on the breakfast news, just another momentary spectacle in an otherwise boring and stagnant world. He grabbed the radio.

“Is the net ready? Over.” He spoke so quietly it was as if he was asking only himself.

There was only a second’s pause before the crackled reply came.

“Yes sir, it won’t get beyond Waterloo Bridge. We’re all set here. Over”

He replaced the radio back on the wheel column of the Targa 31 Fast Patrol Vessel he was piloting. He wondered what the whale would do when it reached the dead end. He knew his commanders were talking to authorities around the world as to why this creature was even here, in his river. Some were saying climate change. Others were saying illegal whalers had chased him there. The only thing that seemed clear was that nobody really knew.

The bull now knew his purpose. At first, it had been to simply keep moving, hoping the pain in his head would dull. His enormous brain, the size of a small car, had recognised the link between his aggressive desires and the pulsing agony. It was as he had prepared to attack and sink a small vessel in sheltered waters that he had noticed the sudden subduing of the pain. He had turned away from the boat in angry confusion, driving himself away. He was used to parasites – the crustaceans that clung to his flippers and flukes, or the remoras that sucked onto his belly. He now recognised the violent urges that swelled up in him as the alien intrusions of such organisms. He fought the unnatural desires with his wavering will-power, seeking out and trying to communicate to the animals he felt compelled to destroy. Now stripped of his strength, there was little more he could do. It was then that he began to sense the net.

Sergeant Mitchell felt the swell underneath as the whale’s giant tail rose out of the water in front of the boat. The animal was putting on a sudden burst of speed, heading straight down the middle of the river. Waterloo Bridge was in full view to the small boats following in its wake, and as Mitchell looked to his left, he could see large crowds gathering on the embankment.

The enormous rippled spine broke the surface of the water. There were cheers and shouts from both sides of the river. The great black head surged through the froth, creating a bow wave as the whale put on more speed. Whistles and camera flashes began to ripple along the banks of the river on both sides. Fathers held their children on their shoulders, pointing and smiling. The cheer rose as one, as an enormous snort thundered out of the blowhole, followed by a jet of mist that rose seven feet into the air. Then it disappeared below the water’s surface.

The bull spread out its flippers wide as it tilted its body and glided into a graceful turn. He sang a last and pitiful song knowing there would be no answer. The very edge of one fin gently stroked against the muddy bottom of the river as he propelled himself upwards with powerful thrusts of his tail. With a final and well-timed flick of his flukes, he shot into the air. His head burst from the water, his body rigid and working hard to gain height and momentum. Then gravity turned against him and his mass, slowing his ascent to the point he seemed to hang in mid-air. He began to twist and fall backwards.

The crowd had little time to react to the enormous creature as its shadow fell across them. They hadn’t expected it to breach so close to the embankment. They watched, unable to move as its great eye moved over the crowd. Those closest felt a wave of sadness sweep over them as they understood its action. The whale crashed down over the concrete rail, rolling forward through the snack and souvenir stand at the entrance to the London Eye. Water streamed down the sides of its body. Its own weight was already killing it, crushing the heart and lungs that would usually be protected from its bulk suspended in water.

As Sergeant Mitchell circled close to the bank, children on the shoulders of their fathers cried. The crowd surged backwards as wonder turned to horror. They turned away from the spectacle they had turned out to see, hurt and embittered by an event they could have never imagined. As families comforted each other, little did they know it would be a poignant yet unheeded warning.