I don’t usually do local sightings, unless they happen to be on my doorstep such as last year’s Knole Park panther. There are some dedicated researchers out there such as Neil Arnold who have been doing it for longer, and do it far better than I. What I usually try to tap into is what draws us to such stories in the first place, preferring to fictionalise the fun rather than poke it, which seems to be how the vast majority of news outlets treat them.

But in a week that has seen both a black cat and a bigfoot reported through the Kent and now wider press, it would seem almost negligent of a blog named black beasts and boogeymen to ignore completely. So with that in mind, I dusted off the old investigator kit, strapped on the walking boots and made my way…to the phone.

On Wednesday 11th November, Paul Turk was making his rounds as a delivery driver in the small village of Ryarsh in Kent when he came across a large black cat, apparently crossing the road. The animal stopped and watched him approach. Mr Turk was able to pull up and observe the cat until it moved away and disappeared into the brush. Before continuing to his next stop, Mr Turk spoke to another driver at the scene about what he had just witnessed. When he did arrive at his next delivery, Offham County Primary School, he spoke to members of staff and contacted Kent Police whilst they reached out to the other nearby schools of Ryarsh Primary and Trottiscliffe Primary. Both chose to text parents to report the sighting.

I have deliberately chosen not to quote Mr Turk, police or school representatives as it is hard to gauge if the witnesses have been misquoted or misrepresented, which is all too often the norm. I have reached out to all parties and may update this post if I am able to. But these are essentially the facts of the case. No looming of the beast, no panic stricken witness. No picture of a yawning melanistic leopard or jaguar, essentially baring its fangs. I have to say it brought back memories of the panic that gripped Penge when another alleged big cat hit the streets of Sydenham, my home back then, in 2005.

When I was writing the blurb to my book Shadow Beast, I deliberately set the scene with a similar encounter of a lorry driver on a remote road. There is something classic about it that echoes what we expect from an urban myth, which is possibly why the story has been picked up with such glee in true tabloid style.

What is unfortunate about such treatment is that despite there being some 2,000 such reported sightings a year, it has the potential to not only dismiss them completely but to also discourage witnesses coming forward. This may seem strange coming from a novelist, but why not embrace the excitement we feel when drawn to these stories and explore the truth. Imagine what we might discover. I have spoken to many conservative, professional people who have experienced something they cannot explain, or even scared and unsettled them. In some cases, a little education goes a long way. In the absence of physical evidence, we often only have witness testimony. And whilst it isn’t wrong to question and query, unless it is obvious it is a hoax or publicity stunt, I think it’s best to offer appropriate forum and analysis rather than judgement. Even in cases of mistaken identity, people often need to talk about what they have experienced and to investigate what they have seen. Discovering they are not alone can be a great source of comfort and affirmation.

At the same time, some stories do need to be treated with a shovel full of salt. Take the other creature to hit the news this week, a bigfoot supposedly spotted in the Angmering Park Estate near Arundel in West Sussex. Whereas undoubtedly the witness did see something large, hunched over and generally black in the undergrowth that scared her dog, it has been quickly dismissed as a father playing hide and seek with his daughter. The picture taken by the witness is typically ‘blobsquatch’ and unidentifiable. At first glance, I thought I saw traits of what is a widely available fancy dress gorilla suit, but I’m just as happy to accept the parental explanation. What’s worse is that I suspect that it wasn’t the witness who approached news outlets, but the local interest group who she reported it to, who no doubt saw an opportunity for some publicity to mention their own spate of recent big cat sightings.

It may be hard to say with certainty what we expect from our press and authorities when people do report such sightings. If it takes the BBC Natural History unit two years to find snow leopards, then Kent Police have little chance by turning up on a whim for instance. And before we suggest launching helicopters and thermal image cams, bear in mind that they have to share a chopper with their neighbour Essex, and running costs are around £2 million a year. 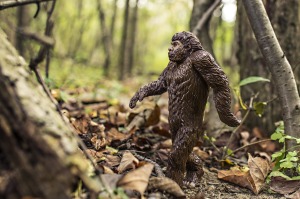 And I don’t say this to ridicule the witness. Only a few weeks ago whilst walking round Groombridge, I decided to entertain my friend and her sons with some Bigfoot calls. The one thing we weren’t expecting was a response. Now it was without a doubt another human being larking about like I was, but it still made us look over our shoulders whilst we made a sharp exit. Sometimes the monster in the woods is more about perspective and the person in front of it!

It has now been revealed that the Sussex Bigfoot sighting was in fact a PR stunt, carried out by Bigfoot Communications, a PR firm based in Rustington, and was indeed a man in a widely available fancy dress gorilla suit!

View all posts by Luke Phillips