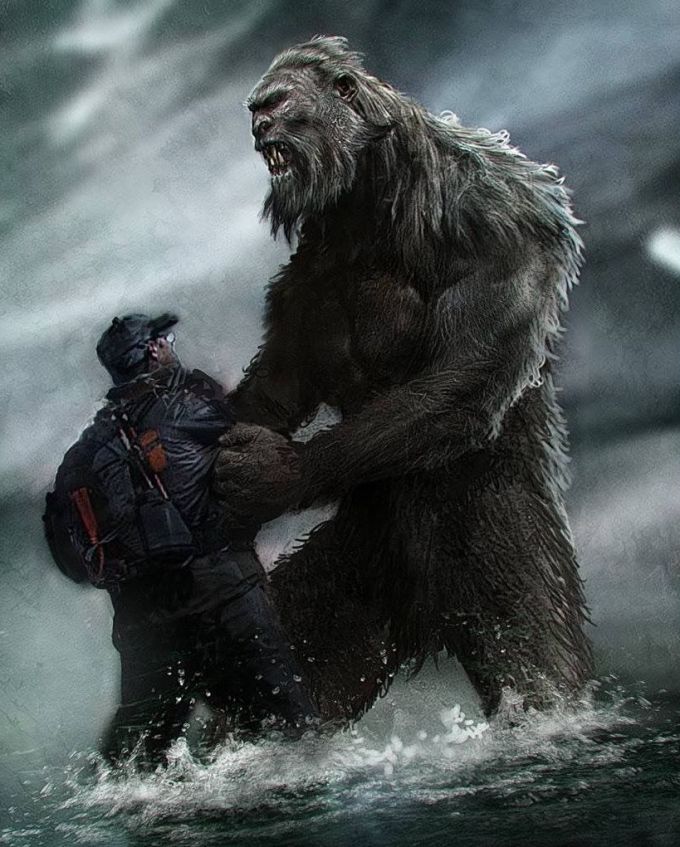 In last week’s Work-In-Progress Wednesday, you were introduced to a new character who will be appearing in my upcoming book, Phantom Beast. That character was Nina Lee, a Forest Ranger, who will be getting her own spin-off series, the first of which is titled ‘Rogue’.

Rogue is another America-set story with a cryptid at its heart. This time however, it is the legendary sasquatch, aka bigfoot, that will be stalking the forests. I won’t give much else away, but I hope you enjoy this first introduction to both Nina Lee and Rogue

Nina Lee took a deep breath, glancing at her cup of coffee that had gone stone cold. She waited for the sobs to reside at the other end of the line. She stared back over the missing persons form. Jake Sutton, nineteen years of age, last heard from three days ago as he hiked south, away from the Pacific Crest Trail and along the eastern border of Mount Rainier National Park. He had abandoned a group of elderly hikers he’d been with, and hadn’t picked up the supply pack waiting for him at the forestry post he’d been scheduled to stop at yesterday. It had now been 24 hours, so he could officially be listed as a missing person. His hysterical mother sounded like she had been counting down the seconds before picking up the phone.

People went missing all the time up here. Some even wanted to. That’s what the families sometimes failed to grasp. After finishing the phone call and completing the report, she filed it and printed out the missing person poster for the board. Whilst there, she took down the outdated ones, the oldest, to make space.

Nina had been with the forestry service for just over five years, joining straight from the University of Washington at Tacoma. Despite majoring in Wildlife Ecology and Management with a minor in Forestry to boot, her aspirations of working with wildlife had quickly been grounded. It was mainly campers, timber firms and water treatment that took up her days. She walked through to the morning briefing. The call had held her up, and she was the last to enter.

“Now that we’re all here,” barked the agent at the front of the room.

The unidentified agent wore darkened glasses and looked like Chuck Norris’s fatter, meaner brother. Nina ignored his stare and took a seat. The guy had already waltzed in like he was the President, not even bothering to tell the lowly rangers which agency he and his suit-clad partner were from. Whoever they were, they seemed to make the chief and the other supervisors nervous. They didn’t seem like the usual Law Enforcement and Investigations Unit types. Although his partner could easily pass for FBI, fat Chuck most certainly couldn’t. With long red hair, a denim sleeveless jacket and a dirty camouflage tee underneath, he looked more like one of the truckers that might occupy any of the local sheriff drunk tanks. He dressed like a hillbilly and spoke like an asshole, that’s all Nina knew.

“Anyway,” stammered Marty Johnson, her boss, standing up as he did so. “North of the Resolute Campsite is currently out of bounds, and will remain so while these men are in the area.”

“I’m still not clear on that,” another ranger spoke up. “Who are these guys and how come they have that kind of authority?”

Travers was young, but spoke his mind. Nina knew everyone else was thinking the same.

“Fuck you, that’s who I am, son,” growled the Chuck Norris wannabe.

Nina glowered in her seat silently. She really didn’t like this guy.

“This grizzly is nothing like you’ve dealt with,” said the agent in the suit, changing tact. “We’re here to help and sort it out. We’re operating a curfew and closing most of the trails for the time being. You’ll also be paired up for the remainder of your patrols until we clear the area, just to be on the safe side.”

“Excuse me,” Nina interjected. “But most of us are hunters, from native backgrounds. We also deal with aggressive bears and other wildlife all the time. Why the extra precautions?”

“He’s a killer,” snapped the Chuck wannabe. “And the reason he’s a killer is because some little sweetheart like you in the Forestry Service took a pot-shot at him. We’re clearing up your mess.”

“And the fact that none of us here have seen neither hair nor hide of this supposed grizzly?” Nina challenged.

Nina sat back, bristling at the man’s rudeness. She was Skokomish on her mother’s side and Navajo on her father’s. She’d probably known more about tracking and handling wildlife by the time she’d turned five than this guy would ever know. She was certain his attitude stank as much as he did, and looked at Marty for back up. She couldn’t believe he was standing for this. Marty failed to notice, as he was too busy staring at his feet. The meeting appeared to be over.

As the rest of the Forest Service officers got up and began to make their way back to their desks, Nina hung back. She noticed she wasn’t the only one. Scott Travers was too. Concerned his youth and brashness would get the best of him, she was determined to get to Marty and the two agents before him. She walked over, hurriedly.

“The others may be prepared to put up with this anonymous juris-my-dick-tion crap, but I won’t. I want to know who you guys are, I want to see your shields, and I want to see written authority. Until then, you, especially you,” she declared, pointing at fat Chuck, “can check your egos in the parking lot, whilst I run your plates.”

The look of panic Marty fixed her with did little to dissuade her. She couldn’t believe that a few seconds ago she had been worried about Travers being too blunt.

The agent in the suit stood up, a half smile on his face.

“Okay, settle down, I get it. My partner here can be a little forthright. My name is Special Agent Gregory Smith. This is Agent Cordell Jones,” he explained, nodding towards Chuck.

“Believe what you like, it’s the truth. And it’s all you’re getting,” Jones growled in her direction, stepping forward.

“What department are you with?” Nina asked, ignoring him. “You guys aren’t LEI, that’s for sure.”

“We’re…from a branch within the Bureau for Land Management,” Smith replied.

“That’s even harder to believe,” said Travers, who had walked up behind Nina as they were talking. She realised he was making it clear she had back up, but was keeping a respectful distance. He wasn’t stepping in, but he was prepared to. She appreciated the gesture.

“The Bureau for Land Management are investigating a grizzly bear attack?” Nina continued.

“Imagine if you can, there may be shit you don’t know,” Jones grinned.

“What I can imagine,” shrugged Nina, “is that’s a two-way street.”

Marty met her gaze. He seemed more in control now, but his glance still warned her to back off.

“Maybe they can be of help,” Marty suggested to the agents. “You’ve got a lot of ground to cover, a lot of people to talk to. Maybe it’s a case of many hands make light work.”

Smith gave a nod signifying his approval to Jones, who didn’t seem quite as taken with the idea. Then, smiling smugly, he reached behind him and grabbed a large pile of manila files from the table.

“Well, seeing how good you are at running your mouth n’all, maybe you can carry out some interviews,” he sneered. “It’ll keep you out of our hair, and we won’t have to waste our time with a bunch of drunk natives.”

Nina glowered at the man. She was on the brink of losing control of her temper. She imagined darting forwards and slamming her elbow into his face, breaking his nose. It would be easy, and satisfying. But she guessed Marty was nervous for a reason. She clenched her fists, only a little shake in her arms hinting at her pent-up fury. She snatched the files from him.

“Happy to be of help,” she replied, turning her back.

“One more thing,” Marty said, calling her back. “The patrolling in pairs thing is mandatory. Take Travers with you.”

“What?” Nina exclaimed. “Marty, there isn’t a thing in these woods I haven’t come across on my own before. I can handle it. Plus, up on the res, I can’t vouch for his safety, especially among them drunk natives,” she scowled, staring at Jones.

“My partner was out of line before,” Smith offered, “but you’re close to being the same way. It’s our way, or no way. If you want to be involved, this is it.”

Nina looked at Travers. He shrugged. He was trying to look nonchalant, but he clearly wanted in. She sighed. It seemed like a hopeless fight anyway. And Travers wasn’t a terrible choice of partner. Despite his youth, he was tall, well built, and could handle himself. He was a little impetuous and thoughtless, but nothing she couldn’t keep in check. And he knew not to push his luck with her, which was a major plus. As soon as her demeanour softened, his bright blue eyes sparkled mischievously. She often teased him that he had only been recruited because his brown hair matched the uniform, but compared to everyone else, she knew they could at least work together.

“Come on you big lug,” she sighed.

Travers followed her out of the room back to her desk. As she flipped through the files, she saw some familiar names. Some she dismissed, shuffling them to the bottom of the pile. Others she took an interest in and brought them to the top.

“Well, it might not be a dull day after all,” Nina quipped, looking up at Travers. “We’ll head up to the reservation like they want us to, but we’ll do some sightseeing on the way.”

“Where to?” Travers asked.

“The very one. Bought a huge piece of land out in the forest and built a luxury house out there. Rumour is that it’s less writing retreat, more fortress. I don’t know about you, but I’d like a look around that place.”

“Then there’s Patwyn Dalton, owner of Dalton logging. He’s been complaining about guys from the res moving stuff around his camp, damaging equipment and such like. And he just happens to have been the guy who sold the land to Lucas Christian.”

“I think it’d be interesting to see how they’re linked to each other, that’s for sure.”

“Isn’t it like you said, guys from the res causing trouble with chunks of the forest being sold off?”

Nina smiled. “No, I don’t think so. But I think you’re right about one thing. I think it’s about territory. Let’s go find out.”